Can I receive disability SSI / SSDI for my anemia? 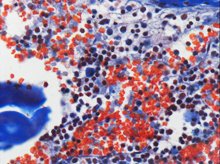 It is estimated that more than three million Americans suffer from anemia. That already high number is expected to grow as the population of the country continues to age – currently 10% of those over the age of sixty-five have some form of the disease. Red blood cells are rich in a substance called hemoglobin, a protein that is responsible for carrying oxygen molecules to the body’s other cells. In adults, hemoglobin-rich red blood cells make up between 35% and 52% of a person’s blood; this number is called the hematocrit level. Normal variations in the hematocrit level occur and depend on factors such as gender and a person’s physical fitness. Anemia is said to exist when a person’s hematocrit levels drop too low, indicating that their red blood cells are not properly transporting oxygen to the rest of their body.

The American Society of Hematology believes anemia has two basic causes: a low amount of red blood cells and red blood cells that don’t function properly. Social Security has a section (Hematological Disorders, Section 7.00) that addresses both forms of the disorder.

For anemia caused by low hematocrit levels, the key factors considered are “chronicity” and impairment. Chronicity is demonstrated by proof that a person’s condition has existed for at least three months. This can be shown by at least two medically acceptable tests over a three-month period showing hematocrit levels below 30%. Impairment can be demonstrated by showing that this low red blood cell number has affected an individual’s body systems. Blood transfusions at least once every two months or an evaluation by a doctor will both suffice as proof of impairment.

Sickle cell anemia falls into the second anemia category – anemia caused by malfunctioning, or malformed, red blood cells. Normal red blood cells are shaped like discs, which allow them to travel through an individual’s blood vessels, including capillaries that are only wide enough to allow one cell to pass through. Sickle cell anemia occurs when red blood cells form more rigid, sickle shapes. These bizarrely shaped cells are more easily trapped in smaller blood vessels which can impede proper flow and cause severe pain. Sickle cell is an inherited trait that affects certain groups in particular, especially African Americans.

To qualify for disability due to sickle cell anemia, a claimant must show either:
A. Documented painful (thrombotic) crises occurring at least three times during the 5 months prior to adjudication; or

B. Requiring extended hospitalization (beyond emergency care) at least three times during the 12 months prior to adjudication; or

C. Chronic, severe anemia with persistence of hematocrit of 26 percent or less; or

D. Evaluate the resulting impairment under the criteria for the affected body system.

If you believe that you may be entitled to Social Security Disability benefits and have questions, call The Law Offices of John T. Nicholson at 1-800-596-1533 for a free consultation today.